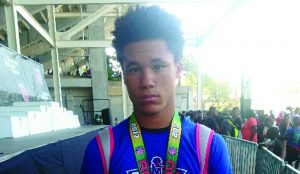 When it comes to Mercer County track, senior Aaron Johnson is a name that comes up quite frequently. Johnson, a state champion in high jump, 200 and 300 meter hurdles,  competed amongst the nation’s best at the AAU Junior Olympic Games from July 29 to August 6.

Johnson competes for the Kentucky Elite Track Club, as does sophomore Jasmine Claunch, who also competed for Kentucky Elite. “It’s exciting from Aaron’s perspective to be an All-American,” said Mercer track head coach Terry Yeast. “He was probably the most disappointed he didn’t get the height he wanted, but I was very proud of his performance.”

Claunch placed 40th out of 54 participants in the female 15-16 age group for the triple jump. She finished with a jump of 32-00.65. “It was really awesome to compete on such a big stage with the most elite athletes,” said Claunch. “I had a really good time and I plan to go back next summer.”