Harrodsburg residents might want to look over their most recent water bills a little more closely.

Over 800 customers have been affected by what city officials call a “glitch” in the system that has led to inflated water bills. In some cases, the bills have been up to five times higher than normal for this time of year.

“It’s actually where they’re catching up with the previous ones,” said Amy Kays-Huffman, supervisor of the Harrodsburg water department. For the last three months, customers may have received lower than average bills, she said.

Averaged over the last three months, the bills would even out. However customers don’t complain about low bills, Kays-Huffman said. But they do complain about high ones. So far, five customers have had their bills adjusted, she said.

Another contributing factor: the former meter reader no longer works for the city, and other workers have had to fill in. While most meters are close to the curb, some of them can be hard to find, officials say. Sometimes there are two water meters in front of the same house. Because it took longer to get the meters read, the billing period was longer, in some cases twice as long as the regular billing period.

Kays-Huffman herself was out reading water meters this month. She said some of the numbers seemed high, but during the summer months—with children home from school, with swimming pools being filled and water leaks caused by changes in temperature—“It’s hard for us to judge,” she said.

For people who have received a higher than expected bill and who are not eligible for an adjustment, the city will set up a payment schedule, Kays-Huffman said.

Mayor Eddie Long wants the public to know the city is taking steps to address the problem. Long set aside part of Monday’s Harrodsburg Board of Commissioners meeting for the public to complain about their water bills.

“We’ve had too many complaints,” the mayor said, “and we’re going to do some things.” 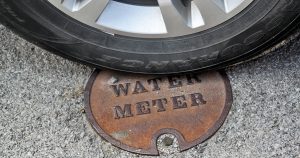 Harrodsburg officials are working to fix a ‘glitch’ in the billing system that has left some customers with higher-than-average water bills.