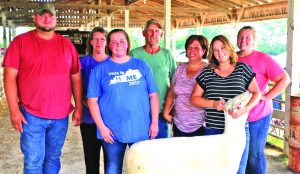 Showing livestock is not for everyone. It’s hot, hard work to get an animal in the show ring and it takes hours to get them ready.

So why do it? Earl Nichols answers  with one word, “family.”

A Mercer County farmer, Nichols, along with his brother Glenn Nichols, is one of three generations of the Nichols family currently raising, breeding and showing sheep at the Mercer County Fair and Horse Show. Nichols said his father, E.E., started him and his brother when they were old enough to join 4-H.

“I’ve been showing almost 60 years, and I still love it,” said Nichols.

Nichols keeps around 90-95 in his herd, selling off most of the rams and keeping the ewes for breeding and showing. His daughter, Kim Bottom, has about 60 in her herd and grandson, Austin, has about 30. While Nichols may be proud of the ribbons and titles won over the years, it’s obvious his real pride is in his grandchildren and the success they have had in and out of the show ring. “I feel very fortunate because all of my grandchildren have wanted to work,” he said. “That’s rare now-a-days.”

One granddaughter, Morgan Milburn, is a FFA teacher at King Middle School. Nichols feels the lessons she learned showing sheep influenced her to teach agriculture. He started his children and grandchildren showing around 10 years-old, just like he did. He always felt it was good for the children to have a livestock project to help learn a work ethic and what it meant to compete.