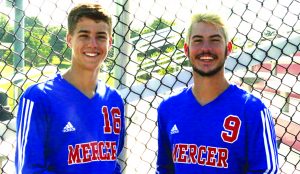 Seniors Austin Bartley (left) and Brandon Ballard (right) have to take on leadership roles this season as two of only three seniors on the team. Not pictured: Trey Releford. (The Harrodsburg Herald/Arpan Dixit)

Replacing seniors is always tough, but replacing an all-state senior an even more daunting task. With All-State performer Garrett Dean graduating, the Mercer County boys soccer team has a lot of big shoes to fill.

Losing players like Denson Jenkins and Zack Martin can be devastating to a team, but Stark believes that won’t be challenging with the types of players he has. “Anytime you lose key players, it’s always tough coming back the next year,” said Stark. “Last year we had some really strong leaders in our senior class, but this year we are really young. Every year, guys step up and fill that void.”

Stark expects his team to come out every game and play to their highest standard if they want to win three straight region titles.

Seniors Austin Bartley, Brandon Ballard and Trey Releford will be called upon by Stark to provide leadership and focus to the underclassman. Being a senior comes with a lot of responsibility. Upperclassmen must show how things are done in practice and games, as well as, making sure all the underclassmen are playing and practicing the way they should be.

Stark believes the amount of leadership the seniors last season showed, will carry into this season.

Freshman James Johnston is expected to start to begin the season, and has a bright future as a Titan. “We take every week as a week to become a starter, so every week these guys are battling for spots,” said Stark.

Stark said one good thing is, the younger players are taking on the challenge against the older players, and that will lead to improvement for the younger guys looking for a starting spot.

Junior Jacob Cruz will be the goalkeeper to start the season. “He’s been starting in the preseason and doing a really good job,” said Stark. “Obviously, losing a player like Zack (Martin) from last year is tough to replace, but I know Jacob is up for the task.”