The Mercer County Fair and Horse Show closed out its 190th consecutive show Saturday night awarding the five-gaited championship, inducting three men into the Hall of Fame and officially naming the motorsports track  after the late board member “Big Joe” Wilson.

The 2017 Hall of Fame inductees were saddle bred trainer George Knight and past board members Jimmy McGlone and the late Bobby Pugh.

Knight gained national recognition in the 70s training world champions like Christmas Carol, Serve Notice and others from a stable in Ohio, when Mercer County horse owner Jean McLean Davis hired him to run her operation at Oak Hill farm. In 1992, he went on to open his own barns in Lexington and remains there still with his partner Kim Skipton. He is the only living trainer to have won the world championship in the five gaited, three gaited, fin harness and roadster to bike divisions.

The second inductee was the late Bobby Pugh. Emcee David Collier said, “Bobby was a faithful husband, father, friend and local business person until his premature death in 1996….Bobby was one of the those special people who was willing to do anything needed to keep the old show humming along.” Pugh loved the road horse classes and since his passing, a trophy in his memory has been presented each year to the roadster to bike champion.

The third inductee was James “Jimmy” McGlone. A local family and businessman, he was active on the fair board from 1982 to 1999 and still serves as a special advisor. McGlone and the late renowned horse trainer, Tom Moore, worked together to design and build the current show ring after the 1982 fire. The ring is considered one of the best outdoor show rings in the nation, with hundreds of top quality horses and ponies showing each year. 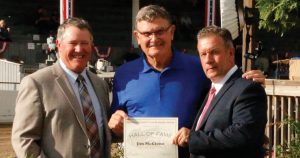 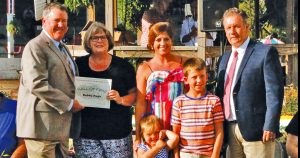