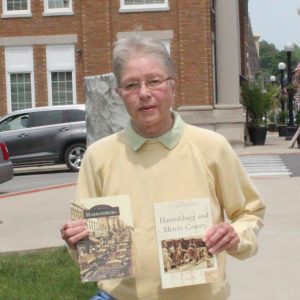 Anna Armstrong poses on Main Street with some of the books she’s written about local history.

The oldest city in Kentucky has been chosen to be part of a unique initiative to preserve oral history.

Harrodsburg is one of eight cities asked to join the City Stories Project, a collaboration by the Kentucky League of Cities (KLC) and the University of Kentucky Nunn Center for Oral History. According to the KLC website, the goal is to create a model for communities to develop their own oral history programs.

“The object is to try to generate interest in getting oral history programs started throughout the state,” said historian Anna Armstrong. Armstrong is leading Harrodsburg’s oral history project.

She started the Harrodsburg-Mercer County Oral History Committee with Kandi Adkinson. They began collecting the stories of the African American citizens of Harrodsburg, but they branched out to record stories from people in Burgin, Salvisa and the rest of Mercer County.

Recruited by Mayor Eddie Long to lead the Harrodsburg City Stories Project, Armstrong will attend a one-day training session at KLC’s Lexington office and start work on the program next year.

Armstrong said the theme of the new project is to record the changing face of agriculture in Mercer County, from small scale family farms to large industrial farming, especially the area’s few remaining tobacco farmers. She said she’ll be working with both the Kentucky Farm Bureau and the FFA. While she wants the stories of older, established farmers, she also wants the stories of newer farmers who are starting farms of their own.

To participate in the Harrodsburg-Mercer County City Stories Project, call Anna Armstrong at 734-6260 or by email at annaarmstrong@bellsouth.net. 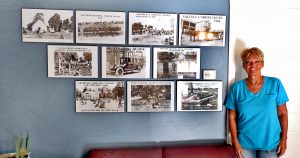 Roselyn Drury, sexton of Spring Hill Cemetery, stands by a vintage photo exhibit donated by Anna Armstrong and Armstrong Archives. The pictures are of country churches and cemeteries around Mercer County. Drury invites the public to stop by the office and see this new permanent collection.