An eventful year for the Mercer County Fair and Horse Show ended Sunday night with a fire.

Fire destroyed a barn at the fairgrounds in Harrodsburg late Sunday night, but no horses or people were injured.

The fire was reported about 11:30 p.m. Sunday at the fairgrounds on Linden Avenue. Harrodsburg Fire Chief Ric Maxfield said his firefighters were on the scene within four minutes of receiving the call. Ten other firefighters—either part-timers or volunteers—also responded. They had the fire under control within 45 minutes, Maxfield said.

No horses or other animals were in the barn at the time, the chief said.

“If a fire had to happen, this was the best time for it to happen. Twenty-four hours earlier it would have been devastating to the horses and grooms in the barn, as well as the expensive equipment and trailers around it,” said Fair Board President LeMayne Ellis. “We are so grateful for the quick response time of the fire department.”

The cause of the blaze was unknown, Maxfield said. The building had been empty since 4:30 p.m., he said, and there was no evidence of fans, heaters, volatile chemicals or other typical causes of fires.

“These types of fires are hard to investigate,” said Maxfield, who has been in contact with the state fire marshal’s office. “There are only three or four possibilities, but I’m not going to speculate.”

By Monday morning, little was left of the building except the mangled remains of the metal roof and some melted plastic trash barrels.

Maxfield said the flames towered in the sky. When another nearby barn began smoking, firefighters doused it with water.

“They did a good job keeping it from spreading,” Maxfield said.

This is at least the third time in recent history that fire has damaged the fairgrounds.

According to media reports, in 1981 a blaze leveled the grandstand and show ring, which were rebuilt.

In 2008, a section of the grandstand was burned to the ground. That same year, a tornado ripped through the corner grandstand. 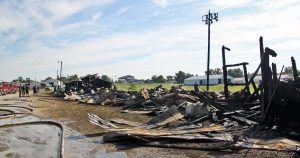 No one was hurt in a fire that destroyed a barn at the Mercer County Fairgrounds Sunday.