Showers did not prevent good-sized crowds from attending the opening night of the 190th Mercer County Fair and Horse Show.

“My experience in the pageant was awesome,” said Buchanan. “Kay (Burton) and Christine (Johnson) are so good at what they do. They really helped to boost my confidence and I really enjoyed doing it with my cheerleading teammates. We got to do one last fun thing together before heading off to college.”

Buchanan is attending the University of Kentucky where she will be studying business and marketing.

In its second year, the Mrs. Mercer County Fair pageant had eight contestants with Martina McKitric crowned queen. Members of the queen’s court included Amanda Massie, first runner-up, Denise Driscoll, second runner-up, and Karla Curtsinger winning most photogenic. The Mrs. Pageant is judged on poise and confidence on stage and when speaking during the active wear and formal dress portions.

The rest of the week included the Pre-Teen Mercer Fair, Little Miss and Mister and Tiny Miss and Mister pageants. (Editor’s Note: photographs and results from those pageants will be in the Aug. 4 edition). 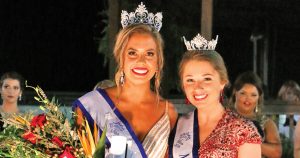