It’s Saturday night at the James Harrod Amphitheater. While Capt. James Harrod (played by Than Cutler) is trying to save Harrodsburg from Indian attacks, land speculators and his fellow settlers, Debbie Hayslett Webb is backstage sharing octopus recipes.

“I’d make a salad,” said Debbie, who plays Mrs. Pogue in “James Harrod: The Battle For Kentucky.” “It’s so good.”

Debbie invites Megan Preston, the leading lady, over to her house for dinner one night to try it.

She’s not joking. In addition to her son Henry, her niece and nephew, Lauren and John Hayslett, also appear in the play.

That makes at least four generations of Debbie’s family to have been involved in outdoor drama in Harrodsburg. Her grandfather, Gilbert Hayslett, was one of the original backers for “The Legend of Daniel Boone.” Debbie still has the note of debenture he signed back in 1963. 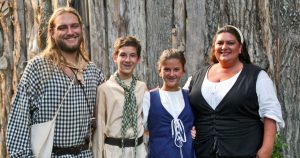 Henry Webb, John and Lauren Hayslett and Debbie Hayslett Webb are two of the four generations of the Hayslett family who have supported outdoor drama in Harrodsburg. “We’re all like family,” Debbie says.