Plans for the second Oktoberfest are moving along. Three sponsorships—for beer, cups and wrist bands—have been sold while vendor applications have been sent out and bands have been booked to play at the event, which will run Oct. 13–15.

The festival—the first to sell beer since Harrodsburg went wet in May 2016—is of vital importance to the organizers, the Harrodsburg First Main Street Program.

Oktoberfest is part of Harrodsburg First’s efforts to rebrand the city as a place with a culture of fun, entertainment, events and activities.

It’s also important to Harrodsburg First’s bottom line. The organization has a $10,000 deficit for next year, so the board of directors are hoping the festival brings in more than the $45,000 to $66,000 that’s been projected. According to their 2017 budget, it’s the only event they expect to earn any income on. The first Oktoberfest, which Harrodsburg First says drew 8,000 people to the city’s downtown business district over three days, lost money in its first year.

But the organizers have had a full year to plan and look at what worked and what didn’t last year. 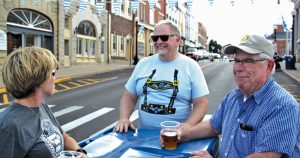 With two months to go, most of the entertainment has been lined up, with bands like Conch Republic, J. Berry, Brown to the Bone and Ben Lacy and Soul Review signed up to play. Wagner said there are still two spots left open.

While Harrodsburg First has signed three sponsors, they have not announced the main sponsor, although Wagner said they are in negotiations.