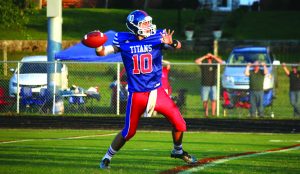 For a quarterback, senior year is the year to prove you are capable of leading a team and proving to college coaches you are ready to play on the next level. Senior quarterback Gunnar Gillis looks to take the Mercer County Football team further in the state playoffs after losing a tough game to Wayne County last season in the quarterfinals.

“I don’t like to dwell on the past, but I do use last year’s loss as motivation to work harder in the offseason,” said Gillis. “If we want to be successful, everyone has to know their jobs and give 110-percent every game.”

Gillis moved to Mercer County from Anderson County his junior season and talked about the smooth and easy transition from switching counties. “The fist day I moved here, my new teammates came to my house and took me to dinner. We have been brothers ever since,” said Gillis.

He said he still considers his former friends and teammates from Anderson family and wishes them the best this upcoming season. Gillis said there is not much difference in the counties since they are so close, but said the main difference he sees is the competition seems to be a little tougher in region play, in both basketball and football.

Last season, Gillis went 114/237 for 1881 passing yards, 20 passing touchdowns, four rushing touchdowns and eight interceptions in 13 games. Gillis averaged 145 yards per game and a little over a touchdown a game.