Patrolman Casey Rucker is upset with how the Burgin City Council is handling the city’s new $1.4 million budget. The budget includes a $3,500 increase for Rucker, but at last week’s meeting, the council voted to hold off on giving him the raise.

“I’m kind of disappointed,” Rucker said, who was hired by the city to replace Chief James Caldwell in July 2016, “because the city has paid Jim Caldwell $65,000 to do nothing.”

“The council is not denying your raise, sir,” said Councilman David Caldwell, who is Jim Caldwell’s brother.

David Caldwell moved to table Rucker’s raise until the council had worked out a pay scale for Rucker’s job. Councilwoman Katrina Sexton, who seconded the motion, said pay scales were created by other governments for workers like police officers, firefighters and teachers. Sexton said the pay scales give employees an idea of what they will be paid at different points in their careers.

“I’m more than happy to look at it again,” said Sexton, who asked City Clerk Michelle Russell to put the item on the agenda for next month’s meeting.

Rucker was not happy, despite their assurances. 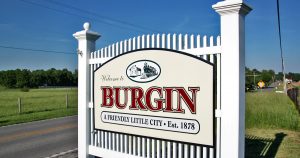 Burgin Policeman Casey Rucker questioned the city council after they deferred a raise that was already in the city’s new budget.