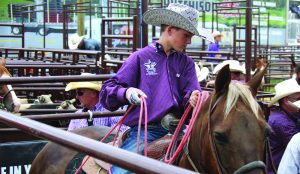 Mercer student Josh Gammon will be competing in the largest youth rodeo in the world. (Photo Submitted)

Mercer freshman Josh Gammon is competing with the best of the best at the 69th annual National High School Finals Rodeo (NHSFR) in the team roping competition. The competition started on Sunday, July 16 and will run until Sunday, July 22, in Gillete, Wyo.

“This is a great experience because it is the largest youth rodeo in the world,” said Gammon. “Everyone there had to earn their spot to qualify that means it’s the best of the best.”

Gammon also said he likes the social aspect and the chance to meet other contestants from different places. Featuring more than 1,750 contestants from 43 states, five Canadian provinces and Australia, the NHSFR is the world’s largest rodeo, according to NHSRA.com.

In addition to competing for more than $200,000 in prizes, NHSFR contestants will also be competing for more than $350,000 in college scholarships and the chance to be named a NHSFR World Champion. To be named NHSFR World Champion, contestants must finish in the top 20 based on their combined times and scores in the first two rounds to advance to the final round, which will be held on Saturday evening, July 22. World champions will then be determined based on their three-round combined times and scores.