The fiscal courts of both counties met in Mercer County last week to discuss how the costs of operating Boyle County Detention Center (BCDC) are being divided. It was the first joint meeting of the two courts since 1996, when they adapted the interlocal agreement.

According to that agreement, Mercer cannot pay more than 50-percent of the expenses or less than 35-percent.

Mercer Judge-Executive Milward Dedman and County Attorney Ted Dean want to lower that floor. They said Mercer has not had 35 percent of the inmates in the regional jail since 2011. Over the last five years, the count has steadily dropped. According to figures they provided, last year Mercer’s share of the jail population was at 29-percent.

Considering that each point amounts to around $21,000, Dean said Mercer is paying “a pretty big chunk of change” more than their fair share.

Their request did not go over well with the Boyle County delegation.

“If you don’t like what you’re paying, take them somewhere else,” said Boyle Magistrate Phil Sammons.

“We’ve been working together for 21 years, let’s not end our partnership on a Thursday night in Mercer County Fiscal Court,” said Boyle Judge-Executive Harold McKinney.

McKinney said he was “sympathetic to some degree” to Mercer’s position, but he’d prefer to renegotiate the interlocal agreement when the jail’s bond expires in February 2019.

“We’ve got a good, fair agreement that we ought to ride out to its termination,” McKinney said. 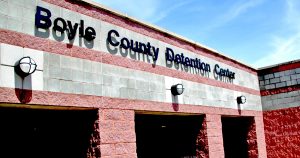 County officials feel Mercer is paying more than their share for BCDC, while Boyle officials want to continue the interlocal agreement unchanged.