Over the summer break, the administration at Burgin Independent School has been making ambitious changes that go beyond the new sign in the main hallway welcoming students to “Bulldog Country.” The Burgin Board of Education has approved the district’s very first athletic sponsorship, hired a public relations firm and moved toward charging tuition to students who live outside the district.

The board approved an Adidas sponsorship—the school’s first sponsorship agreement—through Bumblebee Team Sports of Nicholasville. The school will receive $4,000 in funding along with 40-percent discounts for school branded apparel and 35-percent discounts for footwear and accessories. Fans, parents and students will be able to purchase merchandise online, a percentage of which will go back to the school, LeMonds said.

The funds, which can’t be used to purchase adult apparel, will be distributed among Burgin’s athletic programs. Within two years, every athlete will be outfitted in Adidas apparel, LeMonds said.

The board also agreed to hire Abby Piper of Piper Public Relations in Louisville, to handle Burgin’s efforts to rebrand itself.

“We’re a district of distinction, I think we need to promote that,” said board member Ben Bradshaw.

However, the biggest change made at Burgin is the decision to start charging tuition.

LeMonds said every call he’s received has been from parents asking how to sign up. 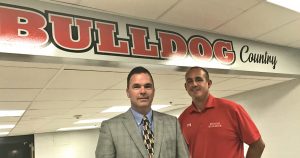 Burgin Superintendent Will Begley and Principal Chris LeMonds stand beneath a new sign that welcomes students to “Bulldog Country.” The district has been making changes to how Burgin portrays itself to the outside world.