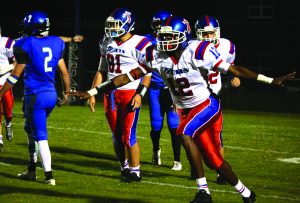 Senior Trevon Faulkner looks to lead his team not only on the basketball court, but the gridiron as well. (Herald File Photo)

Add another award to the trophy case of Mercer County standout Trevon Faulkner, as he was named Cats Pause pre-season district five player of the year last week.

Faulkner is known for his skills on the basketball court, his athleticism and his will to do whatever it takes to win, but it is his football ability that takes the headline this week

Faulkner talked about the award.

“It’s an honor to be named preseason player of the year,” said Faulkner. “I didn’t really think I would be doing what I’m doing, but I just thank God everyday for blessing me with this talent.”

It is safe to say Faulkner is a dynamic player and his athletic ability and talent are through the roof.

“I’m just trying to improve and get better everyday in practice,” said Faulkner. “And for our team I just want to get better and become a family during this season and hopefully win a couple trophies on the way.”