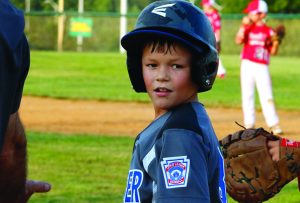 Mercer 10U player Cohen Sanford made it safe at first off a single in their shutout win Friday night over Powell County. (The Harrodsburg Herald/April Ellis)

The Mercer County 10U swept through the weekend, but their season ended in the hands of the Eastern All-Stars on Monday night. Here is a recap.

After sweeping through the weekend against Richmond, Anderson County and the Powell County All-Stars, the Mercer County 10U All-Star team’s season ended against the Eastern All-Stars 13-6 on Monday night.

Carter Devine, Ayden Stephens and Cohen Sanford came in for relief, but the Eastern All-Stars bats proved to be too much for Mercer.

Eastern quickly jumped out to a 6-0 lead after two innings. Mercer was able to cut the deficit to three after three innings, but the Eastern bats woke up again late in the game and put the game away after the fourth.

Mercer 10U all-stars had a great weekend, and it ended with a 12-8 victory over the Richmond All-Stars on Sunday afternoon. A strong start was the key to victory for the 10U All-Stars as they scored nine runs in the first two innings of the game. Marshall Hart earned the win for the 10U All-Stars, pitching three and two-thirds innings, surrendering four runs on five hits, five strikeouts and two walks.

Mercer’s first run was driven in by Devine as he doubled into center field scoring Drakeford. Doughty hit a sacrifice fly to score Devine for the second run of the game. Hager tripled on a line drive to center, scoring Jackson Whitenack for Mercer’s three-run first inning.

Mercer 10U All-Stars didn’t surrender a run or a hit against Anderson County as they shut them out 7-0 on Saturday night. The first run of the game wasn’t scored until the third inning, and that was all Mercer needed to secure the victory. An exceptional pitching performance by the starter, Whitenack, en route to the victory. Whitenack pitched four and two-thirds innings, surrendering no runs on no hits, seven strikeouts and one walk. It was a combined no-hitter for Mercer as Doughty came in to relieve Whitenack. He pitched one and one-third innings, giving up no runs on no hits, two strikeouts and no walks.