A local man sits in jail after being caught in a stolen truck loaded down with stolen property.

On Thursday, July 6,Joseph Tyler Goodlett, 27, of Harrodsburg, was stopped on Jim Forsythe Lane in a stolen truck loaded down with purloined silverware as well as a crystalline substance suspected to be methamphetamine.

According to court documents, Goodlett preyed on property owners who were either away on vacation or, in one case, was staying in a residential treatment facility. Many of the victims had no idea they’d been burglarized. The arresting officer, Dep. Sean Brown of the Mercer County Sheriff’s Office, had to post pictures of the stolen property so it could be identified by the rightful owners.

Antique silverware from a home on Mooreland Avenue, power tools from a barn on Cornishville Road, a red four-wheeler from a barn on Sparrow Lane and a car from Perryville Street—this was just some of the property Goodlett has been charged with stealing.

He burgled the home on Cornishville Road twice. According to the arrest report, he entered the home through a bathroom window. Not content with his haul, he returned at another date and stole power tools from the barn.

From a home on Perryville Street, he stole property while the owners were on vacation, as well as the keys to their vehicle, which he drove away.

He is being held at Boyle County Detention Center on a $35,000 bond. Dep. Brown said they have more suspects, but have not yet made 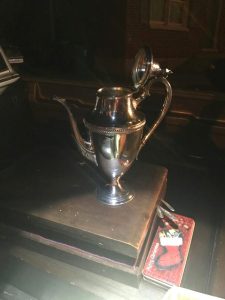 This silver cup is just some of the stolen property Joseph Tyler Goodlett was caught with.

Brown said Goodlett had not given him any trouble during the arrest. “He was honest and up front about his part of it all,” Brown said. “We have recovered most of the items.”