The Fort Harrod Amphitheater will be home again to gun blasts and fiery ambushes with the opening of  “James Harrod: Battle for Kentucky,” on Thursday, July 6.

This year’s production has several new faces, and the most familiar, Allan Barlow, who has played James Harrod since the show started in 2011, has moved from the stage to the director’s chair.

“This year we have a new director, new James Harrod, new Ann Harrod and several more new cast members. We have added several cast and have more members than we have ever had,” said Barlow.

Even though the production is in its sixth year, Barlow says a lot of work has gone into making the production feel new.  “We’ve doubled the amount of women in the production and we have lots of children. Harrodstown was a place for families and it’s going to look the part,” he said. 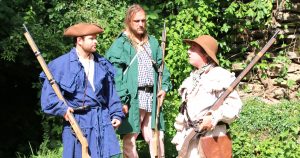 The production runs Thursday through Saturday each weekend of July. The cost is $10 adults, $9 senior and $8 for children under 12.

For more information or to purchase tickets online, visit www.raggededgetheatre.org.