Burgin’s City Council failed to enact a budget for the upcoming fiscal year before the June 30 deadline.

Not enough city councilors showed up at a special-called meeting last week to form a quorum and allow a vote. Council members Jamie Keebortz, Syndicat “Sid” Dunn and Katrina Sexton all failed to appear. Each cited other commitments as to why they missed the meeting, which had been set a week before.

Council members David R. Peavler, Joey Hardin and David Caldwell and Mayor George Hensley all attended the meeting, but were unable to enact the budget.

Burgin City Clerk Michelle Russell said the budget would be enacted through an emergency measure with one reading at the next city council meeting on Tuesday, July 11.

The next meeting of the Burgin City Council is scheduled for Tuesday, July 11, at 6:30 p.m. at Burgin City Hall. 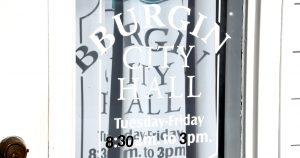 Burgin City Hall will have to change the hours on the door: the new budget will allow the office to be open five days a week.