Mercer County resident Brian Bentley has a special way of giving back to the community. Dressed in the armor of an Imperial Storm Trooper, he has been able to combine the two loves in his life: Star Wars and volunteering.

“I have always been a Star Wars fan, since the original came out in the ’70s,” said Bentley, a 1991 graduate of Mercer County High School. He was especially taken with the Star Troopers.

“When you’re a kid you always want that armor, you want to dress up like them,” he said.

And now he does, through his volunteer work with the 501st Legion, an international volunteer and costume club with members all over the world including Japan, England, Russia and the Americas. According to their website, the 501st Legion was able to fund-raise $889,000 in 2016 and logged 182,000 volunteer hours.

“I was a Shriner’s kid growing up. I had hip problems since second grade and spent a lot of time at Shriner’s Hospital,” Bentley said. “While I was there though, there were a lot of kids going through a lot more than I was. I think that, more than anything, shaped how I am today. It gave me a sense of empathy and compassion for kids with special needs and handicaps.”

For more information and for those looking to have the Blue Sun Squad available at a fundraiser or event, visit www.501st.com and choose “request an appearance.” 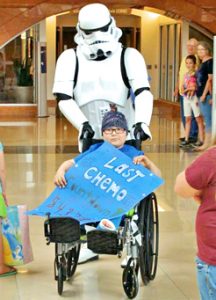 Brian Bentley, a cancer survivor, escorts a patient to his last chemotherapy treatment. “Sometimes it is good that we wear helmets, because it hides the tears,” Bentley said.

Brian Bentley without his helmet.