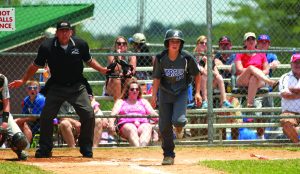 Nicholas Brandenburg takes off for first base after making contact. (Photo by Annette Cheek)

Baseball is a game that can go either way, no matter who is in the lineup and on the mound. Unfortunately, this game didn’t go as planned for the Mercer County 12 and under all-star team, as they fell to Anderson County 14-2 in four innings on Saturday, July 1.

Seth Caton, Evan Hart, Andrew Sheperson and Heath Shewmaker were the four Mercer all-stars to record a hit. Caton recorded the only run batted in for Mercer, scoring Wesley Jordan. The other Mercer run came on a wild pitch before Caton’s RBI.

Mercer fell behind early and when you’re trying to win a game as important as this one, it is hard to make a comeback against a team that was clicking on all cylinders.

After the second inning, the game looked as if it was heading for a classic finish in the latter innings.  But, the third and fourth inning was when everything went wrong for Mercer.

Giving up five in the third and six in the fourth was all Anderson County needed to advance.

The Mercer all-stars put up a great fight this summer and individually with their Little League teams and the kids are eager to get back out on the field to try and improve their game.