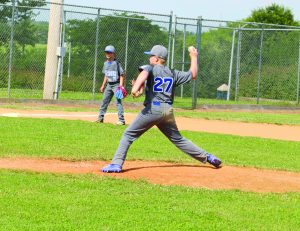 Jackson Whitenack throws the heater during the Mercer County 10U all-star game. (The Harrodsburg Herald/Arpan Dixit)

The Mercer County Little League 10 and under all-star team lost a heartbreaker to the Eastern Lexington all-stars 13-11 on Saturday, July 1. Most teams would give up after being down 13-4 late in the game, but don’t put this team in that category. The Mercer all-stars staged a furious comeback, even having the tying run on second base before ending the game on a strikeout.

Both teams exchanged leads during the first few innings of the game, but after a third inning walk, Eastern took advantage and never looked back.

Davis Tyler, Carter Devine and Ashton Drakeford led the 10 and under all-stars with two RBIs each. Jackson Whitenack and
Marshall Hart recorded the other two RBIs on the day.

Trailing 13-4 in the fifth inning, the comeback was started by an error scoring Jackson Doughty to cut the lead to eight.

After Doughty was Tyler and he doubled to center field, which scored Whitenack and Devine.

The fifth inning ended on a runner caught at third base, but Drakeford doubled to left field, scoring Tyler and Mason Sanders to cut the lead to four heading into the sixth inning.

Whitenack recorded an RBI in the bottom of the sixth, scoring Ayden Sanders. The next batter, Devine, grounded out to first before driving in another run to cut the deficit to two runs with two runners left on base. With the tying runner on base, the 10 and under all-stars weren’t able to muster up any more magic and fell just two runs shorts of an epic comeback.

Eastern Lexington scored three runs in the first, eight in the third and two in the fifth. Devine came in for relief and pitched four innings, giving up four runs on five hits, one strikeout and three walks.

Mercer County scored four in the first, five in the fifth and two in the sixth. Eastern recorded 13 runs on 11 hits with seven errors. Mercer scored 11 runs on seven hits with two errors.