The state has shut down the James Harrod Conference Center.

Kentucky Parks Commissioner Donnie Holland made the announcement last week. Fort Harrod’s other structures, including the amphitheater, the museum, the Lincoln wedding chapel and the fort, remain open to the public.

David Coleman, manager of the Old Fort Harrod State Park, said there were numerous issues, primarily mold, which made the building “not fit for human habitation.”

Coleman said there were “no plans at this point” on what to do with the conference center, which dates back to the late 1980s. He said the parks department had three options: to raze the building, to raze it and rebuild it or to attempt a repair.

“If I had my druthers, I’d raze it and replace it,” the park director said. “The center’s issues are not going away if we try to repair it.” 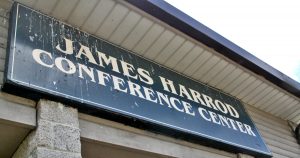 Park Manager David Coleman said mold was one of the primary reasons the state shut down the James Harrod Convention Center, a.k.a. the Black Box.