Last year, the festival—the first to offer beer since Harrodsburg went wet in May—achieved what had seemed impossible: attracting new visitors to Main Street. According to the Harrodsburg First, 8,000 people visited the city’s downtown business district over three days. Earlier this year, the organization won the Best Main Street Program in 2017 award for Oktoberfest.

Local businesses—especially local restaurants, many of which ran out of food last year—are enthusiastic for this year’s festival.

For all that, though, Oktoberfest lost money last year.

Harrodsburg First is betting things will be different at this year’s Oktoberfest, which will run October 13–15. The organization—whose budget is only $116,100 for the 2017-2017 fiscal year—is investing $37,000 into this year’s festival, nearly twice what was spent last year.

Much of that will not come directly from Harrodsburg First, but through sponsorships and donations. The City of Harrodsburg has already agreed to donate $10,000.

All together, the organization estimates Oktoberfest to bring in $66,000 this year. 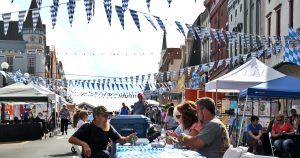 Harrodsburg First is projecting earnings of $66,000 from this year’s Oktoberfest, which runs Oct. 13–15.