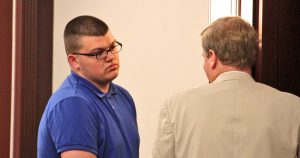 Trenton Easterling returned to court for the first time in months Tuesday morning. His lawyer says he is ready to negotiate a plea bargain agreement or, failing that, to go to trial.

Trenton Easterling’s attorney said he is ready to discuss a possible plea bargain agreement with the commonwealth’s attorney.

Easterling, 17, is charged with first-degree murder and robbery for shooting and stealing from Tristan Cole on April 12, 2016.

Easterling’s lawyer, defense attorney Ephraim Helton of Danville, said the discovery process—the process in which both the prosecution and defense obtain evidence—has been completed.

That evidence will not include a taped interrogation of Easterling recorded by law enforcement officers two days after Cole’s murder.

Last year, Easterling’s former public defender filed a motion to suppress the interrogation, arguing that Easterling, then a student at Mercer County Senior High School, had not been properly advised of his rights.

Judge Darren Peckler granted the defense motion in February of this year. On Tuesday, Helton informed Peckler he was prepared to negotiate with the prosecutor, or, failing that, go to trial. The judge scheduled another pretrial conference for Tuesday, August 8, at 9 a.m.

Easterling, who has been in custody for 14 months, is being kept in a juvenile offender facility outside Mercer County. Tuesday was the first time he’d personally appeared in court in months.

Zachary Lay and Meagan Sims, who are accused of tampering with evidence related to Cole’s murder, also returned to court Tuesday.