After months of presentations, negotiations, charges and countercharges, Burgin City Council has chosen to allow Blue Zoom Wifi of Harrodsburg to install an antenna on the city water tower.

Even though Councilman David R. Peavler said he wasn’t “too keen” on the idea of giving one internet service provider exclusive access to the water tower, he voted along with the rest of the council to accept the proposal.

The resolution gives Skyline Broadband Service of Stanford—who have been paying Burgin $200 a month to operate a Wi-Fi antenna on the tower since 2015—30 days to remove their equipment.

In March, Blue Zoom asked permission to install an antenna as part of extending their network to the Herrington Lake area. However, they wanted exclusive rights to the tower. Blue Zoom officials said two Wi-Fi towers in such close proximity would cause disconnections and data slowdowns.

Along with paying $300 a month in rent on the water tower, Blue Zoom will also provide a free Wi-Fi “hotspot” on Main Street and the company will sponsor local events including the annual fall festival and the Christmas parade. Blue Zoom will also be responsible for electrical service to the antenna.

Sonya Wilson said the 10 current Skyline customers would be able to switch over to Blue Zoom.

“No customer has to be without service,” Wilson said.

“I don’t think we should allow those types of business practices,” Dunn said.

“No matter how it goes, I just want the bickering to stop,” said Mayor George Hensley. 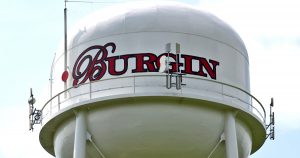 The City of Burgin has agreed to allow Blue Zoom Wifi to install a tower on the city’s water tower.