County residents probably don’t even need to strain to remember their street addresses. It’s one of those ingrained numbers—like your Social Security number, your zip code, your birth date—that everyone has locked away in their memories.

James Whisenhunt of  Bluegrass Area Development District and Gail Napier of Mercer County 911 came before the Mercer County Fiscal Court to discuss the problem with street addresses out in the county.

“We’ve identified a lot of areas where the address ranges don’t work,” Whisenhunt said. “The math just doesn’t work out.”

An address number is supposed to correspond—at least roughly—to a property’s location on a given street. However,  many addresses in Mercer County don’t, Whisenhunt said. “There are 70 addresses on Mackville Road that don’t work,” he said.

“This is an issue we have to deal with every day,” said Sheriff Ernie Kelty. He said his deputies often have to triangulate locations by pinpointing other addresses on the same street.

Driving back and forth endangers lives, said Gail Napier, director of the 911 call center. Napier said her dispatchers have to make decisions on the fly about which first responder gets sent to which location. And delays in finding proper locations can be fatal.

This hasn’t been an issue in the past because of institutional memory. Everyone knew each other and knew where everyone lived. However, with so much turnover—in dispatchers, in first responders, in property owners—finding the right address has grown more complicated. 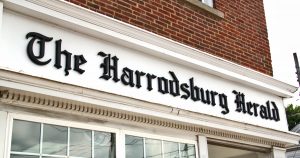 The address of The Harrodsburg Herald—101 W. Broadway—is one of the few addresses in Harrodsburg that may have to be adjusted.