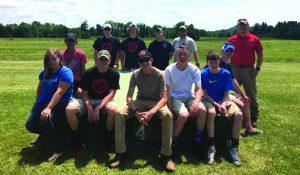 Head Coach Doug Rulon was very proud of his kids and hopes  this season will be a building block for the future. Although none of the Bulldogs placed individually, freshman Julia Holton placed third in the conference for high female average. Rulon talked about his team and what this season has meant to him after his team’s performance.

“I couldn’t be happier with the team’s performance this year,” said Rulon. “Every one of our shooters has at least doubled their hit rates from the start of the season, and many of our athletes are brand new shooters. I couldn’t have hoped for a better group to get the program started.”

A lot of milestones were set for Burgin this season. Being a brand new program was a victory in itself, said Rulon.

“But by far the most important milestones were set by the kids on the field,” he said.

Burgin had two kids shoot 25 straight and one shoot 50 straight in their first year of shooting.

Beginning a program is tough for any school, and keeping a consistent level of excellence is one of the hardest things to do in high school sports. That is what Rulon came here for. To put Burgin trapshooting on the map. He said his first season with this group has taught him a lot and he can’t wait to see what the future holds.

“Our first seasons has taught us a great deal about how to run a shooting sports program,” said Rulon. “We had all our procedures in place prior to approval by the school so we had to build the framework of the team based on what has worked for other programs and other types of sports teams.”

The first season of Burgin trap fined tuned the programs and created a framework to get the shooters ready to compete at the college level.

According to Rulon, coaching shooting sports is very different than other sports. There is a huge degree of individual shooting skills that must be taught to each shooter for the team to be successful. This means the coaching staff has to know each kid’s strengths and weaknesses inside and out in order to shape the team’s collective performance.