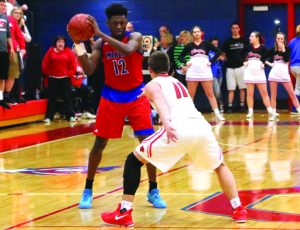 The class of 2018 will be a special one for Mercer County athletics. Trevon Faulkner of the boys’ basketball team and Seygan Robins, Faith Lake, Lexy Lake, Emma Davis and Emmy Souder of the girls’ team will be competing against the top seniors from the 2016-2017 basketball season.

The official all-star game will be held on Sunday, June 11, at the Frankfort Convention Center at 2 p.m. with the girls’ game first, immediately followed by the boys’ game.

Coaching the junior girls’ team will be Mercer’s own Chris Souder and he talked about having the opportunity to coach his players during the summer.

“It is an honor not only to coach the best juniors in the state but to know five of those juniors are from right here in Mercer County,” said Souder. “All these girls have played against each other during the season or on the AAU circuit. I am very blessed to be a part of this program.”

Playing for the senior all stars includes a star-studded lineup consisting of the best players in the state last season. Robins, who is a University of Louisville commit, will be playing against her future teammate in Lindsey Duvall from Bullitt East, who was the winner of Miss Kentucky Basketball 2017.

Along with Duvall, the Lady Titans competing on the junior squad will see a ton of familiar faces. Princess Stewart and Rebecca Cook of Franklin County, whom the Lady Titans beat in the state championship game this past season, will also be on the roster for the senior all-stars.

The boys’ junior team will be coached by DG Sherrill, who will be coaching some of the top players in the state which features Faulkner and another rising star and Faulkner’s AAU teammate, Corbin’s Andrew Taylor. The boys junior all-stars will go up against Mr. Kentucky Basketball in Taveion Hollingsworth of Dunbar and other prospects from the class of 2017.

You can order tickets online at www.kyallstarclassic.eventbrite.com.