Hoskins, 93, still remembers. After 73 years, he can still reel off his serial number.

On June 6, 1944, Hoskins was a green recruit with the 101st Airborne Division, the “Screaming Eagles.” He was a kid from Anderson County who was about to take part in one of the largest military operations in history, the Allied invasion of Nazi-occupied Europe. D-Day.

Hoskins had been shipped to England direct from boot camp. He’d never been out of the country before. According to Hoskins, he’d hardly been out of Anderson County before.

Hoskins said he was sitting in a tent when an officer walked in and volunteered him to ride a glider behind enemy lines in order to run radio wires.

That’s what Hoskins did. He was a wireman with the 327th Infantry Regiment. He kept his outfit connected.

It was one of those Catch-22 situations. If they’d needed him to jump out of a plane, he would have had to volunteer to do it. Since it was a glider flight, they did the volunteering for him.

He said his outfit only lost three men in fighting during D-Day.

From there, he took part in some of the fiercest action of World War II, in Holland and France and Germany. Hoskins and every man in his unit received a Presidential Unit Citation for their courage at Bastogne in France. Hoskins also earned a bronze star and a bronze cluster. 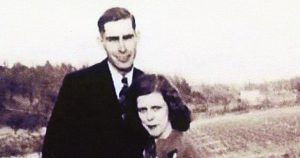 Garland and Corinna Hoskins in 1947. Hoskins survived some of the fiercest fighting of World War II to come back to Kentucky and start a family.