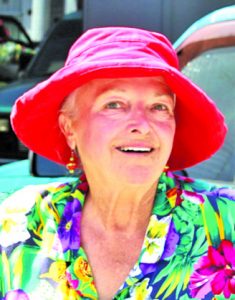 Despite a broken leg, Jane Butterfield said she will start collecting cans again as soon as she can.

Jane Butterfield, Mercer County’s “Can Lady,” has a message for all the people who donate cans to her: “Just hold onto them. I’ll be there in a few months.”

She slipped on a wet deck while picking up cans, she said. Doctors had to repair her knee with screws and a metal plate, but she hopes to get out collecting again soon. Even if she has to do it while wearing a boot.

“If I have a boot I’ll be able to drive,” she said. She hopes the doctor will remove her cast next week.

A self-described “rabid environmentalist” and animal lover, Butterfield moved to Mercer County from California seven years ago. She started collecting cans because she was looking for something to do after she retired.

Butterfield has collected nearly 800,000 cans so far—200,000 since a Harrodsburg Herald profile of her came out last year. She said she aims to collect at least a million before she’s done.

“If I live that long and I don’t break another bone,” she said.