Authorities are investigating a fire in Cornishville as a possible arson.

Billy Gasper, chief of Cornishville Station 3 of the Mercer County Fire Protection District, said the fire broke out around 6 a.m. and the store was fully engulfed in flames by the time firefighters arrived.

“There was no way we could safely enter the structure,” Gasper said.

Ultimately, seven departments were called in, using over 20,000 gallons of water to put out the fire.

Gasper said arson was suspected. The building had stood empty for 11 years, the chief said, and the store’s owner also owned a property in Washington County that caught fire on May 28.

Gasper said it had not been determined if an accelerant had been used to start the blaze.

The case was handed over to the Kentucky State Police. The investigation is being handled by KSP Arson Investigator Pat Alford. 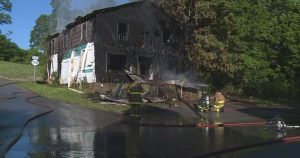 Authorities are treating the fire that consumed an abandoned store in Cornishville as a potential case of arson.