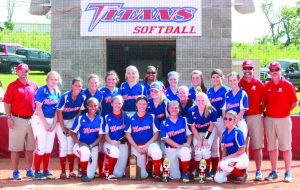 After sweeping East Jessamine in the regular season and out scoring the Lady Jaguars 16-8, the average fan might have thought Friday’s 46th District Championship game would have been a walk in the park. Mercer County Head Coach Robbie Tharp knew better.

“We knew they (East Jessamine) were going to come at us today,” said Tharp. “We’d played them twice already, we knew they were going to make pitching adjustments and get the ball on our hands and get our big hitters to pop pitches up, so we knew it was going to be a tough game.”

The game stared well enough for Mercer with Kelsey Shope driving in Taylor Sallee on a fly out to right field, giving Mercer a 1-0 lead after one inning.

Mercer starting pitcher Lindsay Shope made short work of the Lady Jaguars most of the night, giving up just three hits while earning four strikeouts.

The Lady Titans added another run in the second inning on a single by Leia Freeman, scoring Maddie Williams. With the bases loaded and no outs, Mercer looked in perfect position to build on their lead, but back-to-back-to-back fly outs left all three runners stranded, keeping Mercer’s lead at two runs.

“We were a little eager at the plate, but it was a great adjustment by East Jessamine  pitcher Kaylee Terral to pitch us inside on our hands,” said Tharp. “I thought she did an outstanding job.”

Shope continued to impose her will on the East Jessamine batters in the third inning, but with two outs an error by Sallee at first base allowed Madison Stinnett to score from second base, cutting Mercer’s lead to one run, 2-1.