Lerner and Loewe’s classic musical “Brigadoon” will open the theatrical season at the Amphitheater at Old Fort Harrod State Park on Thursday, June 8.

The production by the Ragged Edge Community Theatre tells the story of two American tourists who stumble upon Brigadoon, a mysterious Scottish village that appears for only one day every 100 years.

The director, Daryl Rickmers, calls the production, which includes a bagpiper, a once in a lifetime event.

Tickets are on sale at the Ragged EdgeCommunity Theatre. They’re also available online at www.raggededgetheatre.org. 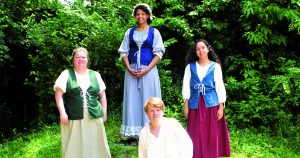