Memorial Day is coming up, and that means cooking out. But double check your hotdogs before throwing them on the grill.

A Cincinnati-based manufacturer of beef franks whose brands include Nathan’s has issued a product recall after consumer complaints of metal contamination.

John Morrell and Company is recalling approximately 210,606 pounds of ready-to-eat hot dog products that may be contaminated with extraneous materials, specifically metal, the U.S. Department of Agriculture’s Food Safety and Inspection Service announced.

The packages bear establishment number “EST. 296.” The products were on sale at retail locations nationwide.

The problem was discovered after the manufacturer received three complaints of metal objects in the beef frank product packages.

There have been no confirmed reports of adverse reactions or injury. However the government advises anyone concerned about injury or illness to contact a healthcare provider.

Consumers who have purchased these hotdogs are urged not to consume them. They should be thrown away or returned to the place of purchase.

Consumers with food safety questions can “Ask Karen,” the FSIS virtual representative available 24 hours a day at AskKaren.gov or via smartphone at m.askkaren.gov. The toll-free USDA Meat and Poultry Hotline 1-888-MPHotline (1-888-674-6854) is available in English and Spanish and can be reached from 10 a.m. to 6 p.m. (Eastern Time) Monday through Friday. Recorded food safety messages are available 24 hours a day. The online Electronic Consumer Complaint Monitoring System can be accessed 24 hours a day at: http://www.fsis.usda.gov/reportproblem. 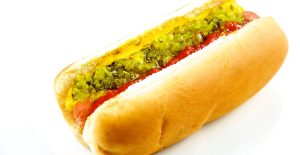 John Morrell and Company, the manufacturer of Nathan’s Hot Dogs, has issued a product recall due to possible metal contamination.