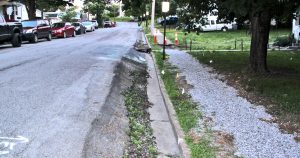 City officials call Marimon Avenue one of the worst streets in the city, but a recent parking ordinance has added to the parking problems, residents say.

The city banned parking on the west side of Marimon during the May 8 meeting. On Monday night, David Gillespie and Doris Bartleson complained the ordinance made parking difficult.

Gillespie does not live on Marimon, but his elderly mother and brother, who are both disabled, do. The ordinance forces Gillespie, who helps take care of his mother, as well as his brother, who has to haul oxygen tanks wherever he goes, to park far from the house where their mother has lived for 49 years.

He said it was nearly impossible to park behind the house. “I had to put it in four-wheel-drive to get out of there,” Gillespie said.

In addition, his mother has fallen twice and been injured in the recent past while walking in the backyard.

Recently, Gillespie was cited for illegal parking. While the Harrodsburg Police Department waived the ticket, he is still upset at the difficulties the ordinance creates for him and his family.

“This ordinance has taken the tranquility from us,” Gillespie said. “It is my hope that you, as commissioners, repeal this ordinance.”

Bartleson, who has a degenerating disc in her spine, lives on the elbow bend curve in the middle of Marimon. She said, for all intents and purposes, she doesn’t have a driveway on her property.

“I can get in there but I can’t get out the door,” she said of her steep-sided driveway.

Another issue is that, with so much room now open on Marimon, some drivers have taken to speeding up and down the street, she said.

The idea to block parking on one side of the street came from the city’s fire and police departments, who say it’s easier for them to respond to emergencies in the neighborhood.

Harrodsburg Police Chief Billy Whitenack said part of the problem is the poor condition of the avenue. Marimon has been paved and repaved so often the street is higher than the curb in several places. As a result, residents keep parking farther and farther away from the curb.

“That’s one of the worst streets we have in the city,” Whitenack said. “If you can fix the blacktop and the curbs, that will fix the issue.”

However, Marimon may not be repaved any time soon. Commissioner Charlie Mattingly, who oversees the city’s public works department, said the utility work would hold up any resurfacing until next year at the earliest. The contractor installing gas lines won’t be done with Marimon until August of this year at the earliest, Mattingly said.

Commissioner Marvin “Bubby” Isham suggested installing handicap parking signs in front of the Gillespie and Bartleson homes, but it was pointed out anyone with handicapped license plates—not just the residents of those homes—would be able to use the spaces.

The commission declined to take action until Commissioner Scott Moseley, who oversees the fire and police departments and was absent Monday night, returns. Instead, they moved to have city workers cover the no parking signs until the commission could decide on a more permanent decision.

“You have been heard,” Long told Gillespie and Bartleson.