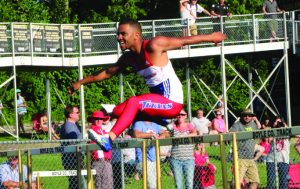 The Mercer County track teams can add a couple more trophies to the hallways of Mercer County Senior High School. The boys team  defended their 5th Region Class 2A championship at Boyle County High School for on Saturday, May 13. The Lady Titans brought home the runner-up hardware, finishing second to hosting Boyle County.

For Burgin, the Bulldogs placed fourth in boys and 10th in girls.

Region and state competition are divided into classes. Here is a recap of the day’s events.

The Titans had a strong showing over the weekend and they will be well-represented at state individually. Junior Aaron Johnson dominated the 100 meter hurdles, as he has all season, finishing first with a time of 14.96. His teammate, freshman Lukas Jones, placed second with a time of 15.77.

On the girls’ side, first and second places were separated by 20 points in the overall standings.

Blevins, juniors Lexy Lake, F. Lake and Stinnett also placed first in the 4×800 meter relay with a 10:03.56 time, qualifying them for state.

Senior Kim Ramirez placed second in the pole vault event with a 8-06.00 vault, qualifying her for state.

Freshman Zoe Yeast, who has looked impressive in her throws all season long, won the discus throw with a 126-07 throw. Yeast also placed second in the shot put with a 36-03.00 throw, which qualifies her for state in both the shot put and discus throws.