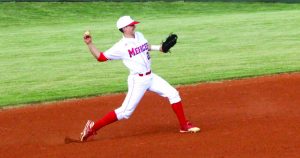 Heading into the last week of the season, the Titans are in a good spot and have really improved their overall play as of late. Here is a recap of their last two games against Anderson County and Prestonsburg, in which they split the two outings.

The Titans jumped out to an early lead and never looked back against the Prestonsburg Blackcats (20-6), winning by a final score of 11-1. Sophomore Josh Barnett earned the win for the Titans pitching six innings, allowing one run on three hits. two walks and five strikeouts. This was the best outing Barnett has had for a couple of weeks as the southpaw has struggled as of late. This was a big win for Barnett as the regular season is coming to a close next week.

Flip the script from the game against Prestonsburg and you have this one. The Titans gave up three early runs to Anderson County (14-11) and weren’t able to muster up and runs as they fell to the Bearcats 11-4.