The Mercer County Sanitation District is offering a $7,500 start up fee and four-percent of revenue to the Burgin City Council for handling billing for the city’s sanitary sewer project, which is rapidly approaching completion.

It’s a take it or leave it offer. If the city council does not approve the proposal by the end of May, the Sanitation District will handle billing themselves.

Burgin City Councilwoman Katrina Sexton brought Burgin’s proposal to the Sanitation District at their board meeting on May 11. However, Executive Director Mike Sanford advised the board not to accept the city’s terms, which included a 30-day termination period for the contract.

The Sanitation District’s offer is a five-year contract with a five-year option. Either side could opt out of the agreement with a 60-day notice. Reconnection fees would go to the city.

The issue of which entity would handle billing and how revenues generated from the sewer system would be divided has become contentious in the last few months, as the system has moved closer to being a reality. 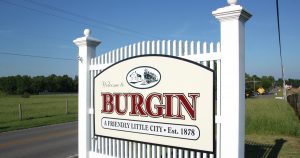 Negotiations over who will handle billing for Burgin’s sewer system have become contentious as the project moves closer to becoming a reality.