There is no more powerful weapon a government has than its budget. As a result, budget meetings can get very tense, very fast. Things started well on Monday night,  as the Harrodsburg City Commission held the second of three work sessions to assemble the city’s budget.

Their task was to cut $500,000 from general fund allocations, which supports everything from the police to the streets department to the city cemetery. The commissioners went through almost every budget item line by line.

Things began well.  Within 10 minutes, Commissioner Marvin “Bubby” Isham, who oversees the cemetery, had managed to cut over $100,000 from the budget, deferring some projects and cutting expenditures.

The first argument began over fuel costs at the city works department, with Isham saying, “These guys do a lot of riding around.”

“I’ve seen a lot of cemetery guys riding around too,” said Commissioner Charlie Mattingly, who oversees the city works department.

Isham wanted the allocation cut. “We’re giving him $5,000 for something he’s already done,” the commissioner said.

Mayor Eddie Long said the position was a federally-mandated requirement for  flood plain insurance. By eliminating it, “It’s possible someone won’t be able to insure their home if it’s in a flood plain,” Long said. 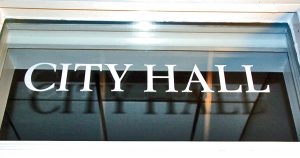