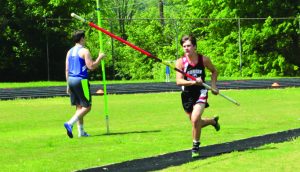 The Burgin boys and girls track teams battled it out with 10 other teams at the 5th Region 1A track meet held at Danville High School on Saturday, May 13.

The Bulldogs also had an impressive showing as individuals were able to qualify for state competition. Junior Hunter Preston, sophomore Drew Hatfield, senior Wesley Qualls and junior Trevar Lay finished third in the 4×400 meter relay with a time of 3:50.89. The same team also finished second in the 4×800 meter relay, qualifying them for state competition,  with a time of 8:42.37.

Junior Cade Shearer placed third in the discus with a 108-55 throw. His teammate, sophomore Steven McGowan, placed seventh with a 87-10 throw. Shearer’s performance qualified him for state competition.

The Lady Bulldogs didn’t place as high as the boys, but great effort was shown by both teams. In the 100 meter dash, senior Sarah Coots finished 14th and sophomore Jayden Watkins finished 20th. Watkins also finished 13th in the 400 meter dash.

Seventh grader Abigale Church finished 10th in the long jump with a 10-02.50 jump.

Junior Miranda Hungate finished in sixth in the discus with a 68-01 throw. Junior Cassie Hunter placed ninth in the event with a 60-01 throw. Hungate also placed seventh in shot put with a 25-03.00 throw. Burgin will be back on the track this weekend as they compete for state titles in their respective classes. The KHSAA State Track and Field Championships will be held at the University of Kentucky on Friday and Saturday, May 19 and 20.