This is the first investment drawn from Apple’s $1 billion Advanced Manufacturing Fund, which is designed to foster innovative production and highly skilled jobs that will help lay the foundation for a new era of technology-driven manufacturing in the U.S., according to a press release.

According to Apple Chief Operating Officer Jeff Williams—who announced the investment Friday with  Corning CEO and Chairman Wendell Weeks—the partnership between the two companies goes back to 2007, when Apple founder Steve Jobs, dissatisfied with the plastic screen on the iPhone prototype, demanded a glass screen. Jobs wanted the screen before the first smart phone went on sale.

Williams said glass manufacturing technology was years away from making anything capable of meeting Job’s specifications, but Apple and Corning worked together to make Jobs’ dream a reality.

“It all happened here in Harrodsburg, ” said Williams.

“We are truly blessed to have employees who are so talented, so flexible and so loyal,” Weeks said.

The announcement was cheered by Senate Majority Leader Mitch McConnell, who held up his own iPhone. McConnell said the phone was composed from parts manufactured in 30 different nations, “but the part we touch comes from Harrodsburg, Kentucky.”

Also cheering the announcement was Harrodsburg Mayor Eddie Long, who attended the press conference, along with State Rep. Kim King.

“Corning has done a lot for us over the years, and so has Apple,” Long said.

Corning employs over 400 workers at the Harrodsburg facility. At Friday’s event, the employees watched from the catwalks as the investment was announced.

“We know they’re going to be here for a while. That’s the main thing,” Long said. 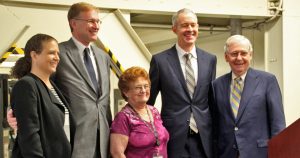