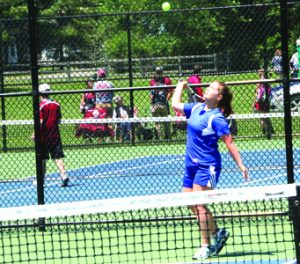 Mercer County tennis teams gave their all in region play. Unfortunately, the Titans and Lady Titans fell a little short.

Here is a recap of the 12 region tournament over the weekend, which was held on the Danville High School and Centre College tennis courts.

Eighth grader Rebekah Trent, the number one seed for the Lady Titans, advanced to the quarterfinal round by defeating Brooke Beauchamp of Garrard County 6-4; 6-0 in the first round and Andrea Martinez of Southwestern 6-1, 7-5 in the second round. Trent fell to overall number one seed Casey Kibler of West Jessamine in the quarterfinals 6-0; 6-0.

In doubles, both Lady Titan teams advanced to the second round.

Number one seed in doubles for the Lady Titans, junior Avery Thompson and freshman Raegan Long, advanced to the second round by defeating Janie Bowman and Heather Thomas 6-0; 6-1. Unfortunately, Long and Thompson were defeated by Pulaski County’s Laila Cook and Isabella Martin 3-6; 5-7 in the next round.

On the boys’ side, freshman Bryson Marcum was the only Titan to advance to the second round in singles and doubles.

Marcum defeated Grant Kerns of Pulaski County 6-3; 6-2 in the first round before losing to Boyle County’s Chase Frisby 1-6; 2-6 in the second round.

The number one seed doubles for the Titans, which featured seniors Denson Jenkins and Nick McClain, lost to Cameron Carver and Stevie Morgeson of Garrard County 0-6; 1-6 in the first round.

Both boys and girls tennis have young teams, so the future is very bright on the court for Mercer County. With players maturing and getting older on both sides, don’t be surprised to see a Mercer County athlete go deep in the region tournament next season.