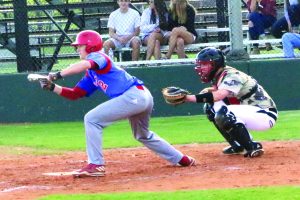 With the latter part of the season approaching, every game from here on out is an important one for Coach Shartzer’s group. The Titans dropped two out of three games to put their record at 11-11 on the season. Here is a recap of the last three games.

You can say this was one of the most impressive outings for senior Mason Hazelwood in his young career, as he struck out 17 batters against Woodford County on his way to a 5-3 win on Saturday, April 29.

The Yellow Jackets (16-8) have had a strong season, but saw their seven-game winning streak ended by Mercer. One thing this Titan baseball team does not struggle with as of late is scoring early. The problem has been keeping those leads, but the Titans earned a much needed win on Saturday night.

Hazelwood earned the win for the Titans pitching a complete game, giving up two runs on two hits, 2 walks and 17 strikeouts.

The Titans started off scoring the first run of the game in the first inning, but was unable to hold on to the small lead and dropped this contest at Washington County, 5-3, on Friday, April 28. Washington County (11-13) came into the game winning four of their last six games, having their best stretch of the season.

The other southpaw on Mercer’s roster has struggled as of late. Barnett has lost his last three starts and saw his record drop to 1-5 on the season.

Both of Mercer’s games against West Jessamine (9-9) could have gone either way. Unfortunately for the Titans, they were on the losing end of both of them.

The Titans lost 4-1 in what was one of the more exciting pitching match ups of the season on Tuesday, April 25.

With two or three plays deciding both games, the district seeding could have looked a lot different.

Hazelwood, the hard-throwing southpaw, took the loss for the Titans, pitching five innings, giving up two runs on two hits, four walks and striking out six.