Mercer County Intermediate School will be showing their production of “Willy Wonka Kids,” tonight, Thursday, May 4, at 6:30 p.m. and Friday, May 5, at 8:30 a.m. in the school’s gym. Admission is only a $1 suggested donation, which will help offset the costs of production.

The show is being put on by the Advanced Music Performers afterschool program under the instruction of Brian Mollett.

“Willy Wonka was a favorite of mine growing up as a kid and I’m a huge Gene Wilder fan, so losing him last year I thought, well lets do this in honor of him,” Mollett said.

He said the kids have been working hard for the 40-minute show and encourages the community to come out and support. “The kids are doing an amazing job with their singing and dancing, we have a lot of great talent,” he said.

Mollett added the costumes are fun and bright, especially the squirrels and Oompa-Loompas. “The parents put in a lot of time and work too. They’ve done a great job. It should be a really nice show,” he said. 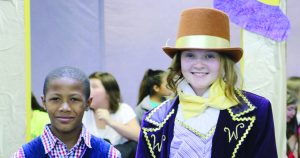 Jordan Piazza as Charlie and Ashley Howard as Willy Wonka invite you to the MCIS production of “Willy Wonka Kids” which runs Friday and Saturday.