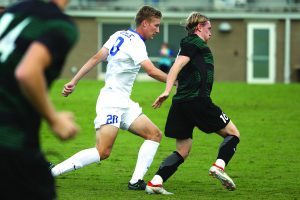 Former Mercer County Titan Landon Souder, who is currently playing soccer for the University of Kentucky, transferred from the University of Evansville in Indiana last season to pursue his dream of suiting up as a Wildcat.

Although Souder sat the fall season out, he has one year of eligibility remaining and plans on making the most of it during his time with Head Coach Johan Cedergen and the Wildcats. Souder talked about the transition going from a smaller school in Evansville to a much bigger school.

“It was tough leaving my friends and teammates at Evansville, but once I got on campus at UK, I felt right at home,” said Souder. “At the beginning, it was a hard pill to swallow that I wouldn’t officially be playing in a real game for a over a year, but I just tried to look at that time as a great chance to improve in all facets of the game.”

Per NCAA rules, Cedergren was not able to contact Souder until he was on campus. In fact, Souder said he didn’t even speak with Cedergren until the first day of classes in the fall. Souder said his decision to move to UK came down to him wanting to be closer to home while still being able to play soccer at the highest level.

Transferring can be hard on a student-athlete, but Souder said his teammates from Evansville and his new teammates pulled him through.

“I had formed some great friendships at Evansville, and I still talk to most of the guys on a regular basis,” said Souder. “My teammates at UK have been great from the moment I stepped foot on campus. I’m not normally the most outspoken guy, but my new teammates really made me feel a part of the team from the start.”