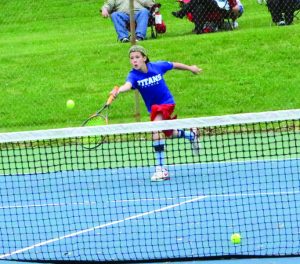 Before region play begins in Berea on Friday, May 5, the Mercer County Titans and Lady Titans finished up a doubleheader against nearby Lincoln County.

The Lady Titans took care of business against the Lady Patriots, winning the match 7-1.

The Lady Titans pulled off a nail-biter against the Lady Lions as they defeated Garrard County 3-2.

The Titan tennis team struggled against the Patriots as they were defeated 9-0 in their final home match of the season. To recap notable matches, number one seed, senior Jackie Cheng, was defeated by Lincoln’s Ryan Montgomery with a score of 0-6.

In doubles, the  team of Cheng and Marcum were defeated by Lincoln’s Montgomery and Taylor 0-6. The closest match of the day came from the number two doubles teams. Becknell and freshman Camden Moseley were defeated in a tiebreaker 7-1.

For full story, please pick up a copy of this week’s Harrodsburg Herald.