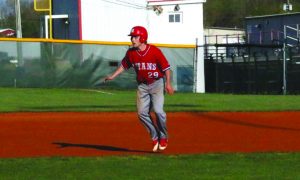 After a week where Titans’ fans saw their baseball team play their most impressive ball of the season, Shartzer’s bunch went .500 last week. Here is a recap of Mercer’s latest games, including two important games against East and West Jessamine which opened up district play.

The game was rescheduled from Tuesday, April 11, due to rain.

The Titans won 4-1 behind the southpaw, who pitched seven innings, allowing only two hits, one run and striking out 10.

After a big district win the night before, the Titans dropped their next game to West Jessamine (6-6) on Thursday, April 13.

In what was a pitchers’ duel all the way to the end, the Titans were unable to answer a couple runs by the Colts, losing 2-0.

Senior Jacob Hyland for the Colts picked up the win as sophomore Josh Barnett took the loss for the Titans.

After two quality outings in district play during the week, the Titans dropped a tough to one of the best teams in the state early on in the season in Henry Clay (11-5) on Saturday, April 15.

The Titans were shutout 9-0 in what was a tough outing for junior Hunter Kelly as he tossed four innings, giving up three runs and allowing four hits.

The Titans rebounded after losing the first game of the double-header to Henry Clay to beat Paul Laurence Dunbar (8-7) on Saturday 10-4.

The Titans had to come back and win this one as they were trailing 4-1 heading into the sixth inning. That was when Mercer took over the game by scoring nine runs in the sixth to blow the game open.

Junior Joe Stoeckinger earned the win for Mercer as he pitched two innings, gave up two hits, four runs and striking out two.