Distracted driving caused by a cell phone is being blamed for an accident at Lee’s Famous Recipe on Monday, April 17.

At 12:55 p.m., police say John C. Cochran of Lexington was attempting to turn into Lee’s drive-through when his 2006 Honda Accord was struck from behind by a 2008 Ford Expedition driven by Jane A. Patton of Harrodsburg.

The force of the collision drove Cochran’s car into the dining area of Lee’s.

No one was injured in the accident, although the building and Cochran’s car were severely damaged. Police say using a cell phone was a contributing factor to the accident. 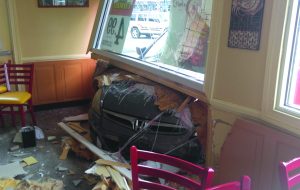 Police say no one was injured in a two-car collision that caused one car to crash into the dining area at Lee’s Famous Recipe on College Street.